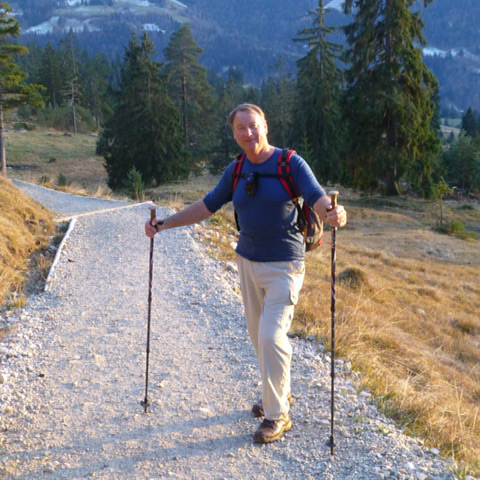 “Meeting Mr Chapman-Sheath was a Godsend. I wish I had seen him in the first place.”

Keen sportsman Peter Turner had his right knee successfully replaced when living in Germany, but he didn’t have such a good experience back in the UK when an operation on his left knee left him in considerable pain.

Despite undergoing surgery, the retired RAF Officer was still unable to walk very far and was starting to give up hope of ever living life to the full again – until he sought help from Philip Chapman-Sheath.

“At age 27 I suffered a sporting injury which tore a cartilage and necessitated an operation. In those pre-arthroscopic days this required a comparatively major open knee operation, a two week stay in hospital and a long period of recovery. It was, I was warned, the end of my sporting activities. Nevertheless, I did my best to carry on with them and over the years had eight other cartilage ‘trims’ by arthroscopic surgery on both knees. These kept me going and I continued to lead an active life.

By my 60s, now retired and living in the Bavarian Alps in Southern Germany, I found it increasingly painful to ascend and descend the steep alpine trails. Extensive research produced a clinic specialising in skiing accidents and worn joint replacements. A surgeon there replaced my right knee. A strict exercise rehab programme was stipulated and followed, and three months later I returned to full sporting activities including skiing which I found I could do in complete confidence. I was warned, however, that the left knee would need replacing in the next two or three years.

Four years later, now living back in UK, I sought out a highly recommended British surgeon about the increasingly painful left knee. It was suggested that, in my case, fitting a new ‘half knee’ would be more appropriate and would bring the benefits of half the hospital time, half the pain and half the recovery time. Based on my previous experience, I therefore anticipated being ‘ski fit’ in six weeks! Sadly this was not the case.

Three months after the half knee was fitted, I was still struggling with mobility – any more than three stairs became increasingly painful. I was diligently doing my rehab exercises but still the pain persisted. We tried resting, exercising, swimming, massage and physiotherapy but after a year with no improvement the surgeon eventually concluded that the half knee hadn’t worked for me.

There were two options: put up with the constrained lifestyle or have the half knee knocked off and replaced with a full knee.

Confidence in the first surgeon dented, I sought a second opinion. This surgeon advised caution; such a ‘revision’ operation could make things worse. Indeed, practically there was probably only about a fifty percent chance of any improvement.

It was then that I consulted Mr Chapman-Sheath who had looked after a physiotherapist friend of mine. She had a very complicated history of multiple ‘revision’ knee operations. Mr Chapman-Sheath had improved her mobility so I wanted to see if he could help me.

My first meeting with him immediately lifted my spirits. He studied all my X-rays over the past year and had new ones taken immediately. He then arranged for an arthroscopic operation the following week to see what was going on inside the knee. He was happy for me to be awake during the operation so that he could talk me through what he found.

There was a significant amount of scar tissue in the joint and undeniable wear on the other side of the joint. He hoped that cleaning out the joint might effect an improvement in my mobility. There was some small improvement but not sufficient to change my lifestyle.

Mr Chapman-Sheath explained the only way to get me moving again was to remove the ‘half knee’ and fit a full new one. He went on to explain that it would be a fairly brutal procedure and that the new knee would probably have to be bigger than one that could have been fitted if it had been done as an initial total knee replacement. Moreover, it would be unlikely to give the same range of movement. Nevertheless, Mr Chapman-Sheath was confident that it would be possible to improve my situation and he rated the chance of restoring my ability to be able to walk rough, hilly terrain, play tennis, golf, sail and ski again at between seventy and eighty percent.

Despite this assurance my partner, Sarah, and I hesitated. This was a significantly more upbeat message but it was still another major operation and I was worried about it. This is where Mr Chapman-Sheath’s empathy and understanding of his patients plays such an important part. He put everything in perspective for me by saying: ‘Put it this way, if you were my father, I’d have you in here next week and do it so that you would have the best chance of living your life in the way you want to.’

That did it for us. We booked in with Mr Chapman-Sheath’s ever helpful secretary, Suzette, for the operation to be performed.

The recovery from the operation was much better than after the half knee operation. I was walking for half an hour quite comfortably within two months, and climbing stairs without pain. After six months I was moving around a sailing dinghy with care but effectively. A year on, I was walking without difficulty for three hours over rough terrain and Mr Chapman-Sheath authorised a return to tennis, golf and skiing.

The bend in the revision knee is not quite as great as in an initial knee replacement because it is a bigger prosthesis and mechanically more restricted in the bending and twisting function. Nevertheless, it gives a sufficient range of movement for me to be able to do all the sporting activities I want to do, so I am very pleased with it.

For me, meeting Mr Chapman-Sheath was a Godsend; I wish I had seen him in the first place.  He is all I like in a surgeon: knowledgeable, skilled, conscientious and careful. He is empathetic and takes great care to fully understand what his patients are striving to achieve with his help. He is patient in his explanations so that it is easy to appreciate the options available and the implications of each of them. He is encouraging but also ensures that his patients are armed with a realistic understanding of the potential improvements possible and any limitations that might apply.

Such is my confidence in Mr Chapman-Sheath that I have introduced my ninety-two year old mother to him as she too has an increasingly painful knee following surgery elsewhere. Her words after her first meeting with Mr Chapman-Sheath sum up his approach very well. “Of all the ten specialists I have seen in the last eighteen months, no one has spent the time to listen, understand and show the determination to get to the bottom of the problem like Mr Chapman-Sheath has. If anyone can help me, I’m sure it is him’.”