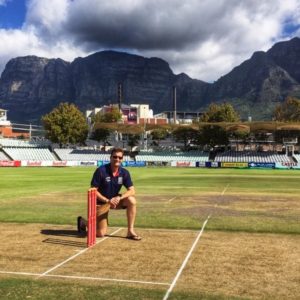 “You are inevitably anxious about how much to test the new knee. The first time I tried to bowl again that December, my heart was in my mouth, but it was absolutely fine – there wasn’t even any swelling afterwards. And, three months later, I was playing for England in the shadow of Table Mountain at Newlands cricket ground in Cape Town!”

When you get the call to play cricket for England, the last thing you want is your knee to fail you, but that was exactly the position cricketer Nick Gargaro found himself in three years ago. Luckily Philip Chapman-Sheath was on hand to help.

“I gave up football in my mid 30s after I damaged the cartilage in my left knee, but cricket has remained a key part of my life even though, as a bowler, slamming your leg down on hard ground certainly takes its toll!

“Eventually, after two or three arthroscopies to take out the damaged cartilage, and plenty of cortisone injections to manage the pain, I began to face up to the fact that something else might have to be done, if I wanted to keep playing. After all, cartilage doesn’t grow back. I started doing some research into knee specialists and came across Philip. What interested me back then was that he was a pioneer in grafting cartilage into the knee from another part of your body, but when I met him, we also discussed the idea of having microfracture, a technique that encourages new cartilage to develop. It was only when Philip went into the knee with a camera to assess it that he discovered I was already too far gone for any of that. It was bone on bone.  I clearly remember him saying “The next time I’m looking at this knee, I’ll be replacing it.” But my reply was ‘no way!’.   I was in denial at that point. I was just turning 50 and had an invitation to play cricket for England Seniors, so I was on a big drive to stay fit. I had Durolane Hyaluronic acid lubrication injections to manage the pain and learned new ways of bowling to compensate, but ultimately it was just masking the problems.

“I played for England in Sri Lanka in the February of 2016, and was really hoping to play for them again, in South Africa, the following year, but in June of 2016, my knee went completely. Ironically, I wasn’t even bowling at the time, but I’d already bowled a lot that day. I went to run between the wickets and my knee failed catastrophically. I was really worried it was the end of my career. I literally dragged myself off to see Philip and we sat down for a frank chat which resulted in me going in for a knee replacement the following month. I remember telling Philip to use as much glue as he could get away with, so the knee didn’t fall off before I played for England again!

“It is amazing what that operation achieves. The very next day the physio came in and told me to get up, which was a bit of a shock, but that afternoon I was actually walking up and down stairs, albeit gingerly! The first three months were quite tough – especially the night-time – although sleeping with an ice-filled cryo cuff on my knee helped to calm it. I remember that the Paralympics were on at the time and that was inspirational. I would tell myself, ‘you think you’ve got problems, look what they’ve achieved’.

“My recovery was helped by the fact that I was reasonably fit, but I also had a major incentive – I had just 8 months before the England Seniors match in South Africa! I coach at Hampshire Cricket Club and, through my connections there, I managed to get physiotherapy from the Perform Centre, who treat the county players. That was enormously helpful, although I’m not sure what my insurance company would have said if they’d known I was trying to run and launch off one leg again. They thought I was just aiming to walk well!

“Luckily Philip was very supportive of what I was trying to achieve. I think he knew that I would do it, regardless, but he was great. I needed to build up every muscle that could compensate for my weaker knee. I only wish that I’d known to do that 10 years ago. There’s a tendency to avoid over-working those muscles if you know there’s a problem when, actually, building up muscles around the knee is just what you need to do.

“A lot of the battle after the operation is also psychological. You are inevitably anxious about how much to test the new knee. The first time I tried to bowl again that December, my heart was in my mouth, but it was absolutely fine – there wasn’t even any swelling afterwards. And, three months later, I was playing for England in the shadow of Table Mountain at Newlands cricket ground in Cape Town! I sent Philip a photo of me there, so he could see what I’d managed to achieve, thanks to him. And, if anyone asks me now if they should have the operation, I say, ‘absolutely, do it!’ “.