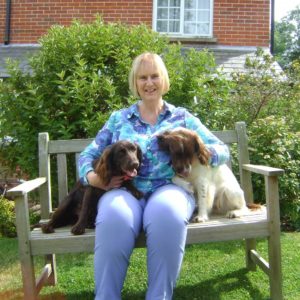 “… if you had told me a year ago that I would go in for a knee operation, without making a fuss, I would never have believed you! There is something about Mr Chapman-Sheath though, a quality that I can’t quite put my finger on, that simply inspires confidence in you.”

Margaret Weston’s arthritic knees were causing so much pain that she couldn’t walk 100 yards, let alone take her dogs out. She was close to needing a wheelchair, and it was clear that something needed to be done, but she was too anxious to contemplate an operation. Only Philip Chapman-Sheath finally gave her the determination and confidence to go ahead.

‘I’m a fiercely independent person and can’t bear to put myself into anybody else’s hands – I hate even going to the dentist – so if you had told me a year ago that I would go in for a knee operation, without making a fuss, I would never have believed you! There is something about Mr Chapman-Sheath though, a quality that I can’t quite put my finger on, that simply inspires confidence in you.

‘I first noticed some twinges in my right knee about 20 years ago, but it was about four years ago, when things got really bad, that I went to the doctor. I had an x-ray and was told that I had arthritis in both knees – but I still didn’t do anything about it for another four years because I was just too frightened! I would take an increasing amount of painkillers and convince myself that I would be OK, but of course they weren’t doing me any good, and I could only walk around the house by moving from one piece of furniture to the next.

‘Thankfully a friend, who had been as anxious about having the operation as me, recommended Mr Chapman-Sheath. I went to see Philip and he immediately put me at my ease, even though he said that my knees were pretty much shot to bits! He has this way of making you feel that having a knee operation is the most normal and obvious thing to do, and that everything will be alright. I actually started to look forward to going to see him!

‘I had my right knee done about eight months ago, as that was the worst one, and we are holding back on doing the left for now. Mr Chapman-Sheath really is amazing. I don’t know how he does it, but even after the operation, I hardly had any pain. It wasn’t even as painful as a migraine. You hear these scare stories from people about how bad it can be, but that wasn’t my experience at all. I went for physio three or four times after I came out of hospital, did my exercises and everything else that I was told to do, and I was walking happily without crutches within four weeks. I would only take a stick if I went to the supermarket to stop people from bumping into me. There isn’t even a scar. Because he does these clever internal stitches, I can only see a very thin, pale white line, about ten inches long. And he even removed a varicose vein for me at the same time!

‘When you are in pain and can’t do things, your world closes in on you, but now I feel that I could do anything. I’ve got my balance and confidence back. I’m not going to be running any marathons, but I never wanted to do that anyway! I’m not someone who leads an exciting life, but I can do the things that are important to me, like walking over the field to see my ponies and walking the dogs. I have got two working cocker spaniel puppies now, and I can walk them through the forest for over an hour. For the past four years, I couldn’t go to the county shows, because that would have meant walking over uneven ground, but I certainly will be this summer. And, at work recently, I was able to do an allotment inspection, which meant jumping over a ditch. I would never have done that before as the horrible jarring would have been so painful.

‘I have a friend who is walking on two sticks and I keep saying, “for goodness sake, go and get your knees done before life escapes you!” When you are getting older, you realise that there’s only limited time to do the things that you want to do, so why hold back!’