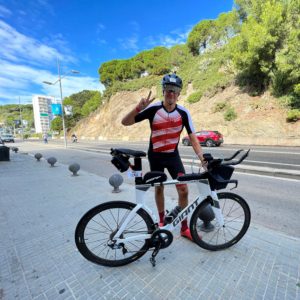 “Less than 12 months after my knee operation, I completed the Barcelona Iron Man. That’s a 2.4-mile sea swim, then a 112-mile cycle ride, followed by a 26.2 marathon run. And I had no stiffness, tightness or any complications!”

When Martin Murphy damaged his knee for the second time, he thought his dream of completing the Barcelona Ironman Triathlon was shattered. Fortunately, he already knew that if anyone could help him, Philip Chapman-Sheath could.

“Being fit is important to me. I’m not someone who will sit on the sofa and watch TV in the evenings. If I take my son to his swimming lesson I’d rather run up and down the surrounding hills while I’m waiting for him than simply sit and scroll through my phone.

I’m 51 years old now and I think I’m probably the fittest I’ve ever been, but it’s not always been easy. A hip flexor injury in my 30s stopped me from playing football and changed my focus to running but then, in 2011, I developed a knee injury.

Due to continued misdiagnosis by the NHS, I didn’t get the guided injection I needed in my knee for two years by which time, unable to run or stay idle, I had taken up cycling instead. So, when, after the injection, I was able to do both, I obviously began thinking about triathlons!

I still had some lingering pain in my knee, so in 2015 I went to see Philip Chapman-Sheath for the first time. Philip performed an arthroscopy to clear out all the debris and decompressed and split the sore tendon which completely sorted out the inflammation and pain.

It was so great I went on to complete about 50 triathlons!

But, in December 2020 I made the mistake of starting a cross-fit course in a gym. I was frustrated at not being able to train outside in the wet winter weather so it seemed a good idea, but the squats and weightlifting were too much for my weak knee. I was at the gym when it suddenly felt like something snapped and my knee simply collapsed under me. It was horrible. I rested it and had physio and eventually could resume light training, but not the schedule required to do an Ironman.

To top it all, and to completely shatter my Ironman dream, I then fell from a ladder when inspecting a loft. I slipped on the floor below and I ended up in an air ambulance with nine broken ribs, a punctured lung and a split liver! I could easily have been paralysed, so I was very lucky.

I obviously had to defer doing the Ironman for a year, but while I was still recovering from the accident, I went to see Philip.

An MRI revealed that my knee was 75% worn out and that I needed another arthroscopy and further decompression of the patellar tendon. But Philip was confident that this would see me through and I had faith in him.

Philip has a reassuring, matter-of-fact manner. He explains clearly what is going on and is so straightforward that you don’t feel there is anything to worry about. I also knew that everything happened exactly as he had said it would the first time that he did the operation on me and so that gave me a lot of confidence.

After the knee operation in October 21, I gave it six to eight weeks and then, to work on my anaerobic fitness, I started cycling. Then, in January I started running again. It was a tough time, especially for my wife and there were occasions when she suggested that I stop training and pushing myself so hard, but I was determined to do the Ironman.

My knee still felt a bit painful in the patellar area so, in February, I went to see Philip and he gave me a steroid injection to settle the knee down. It did the trick. I had ten events in my diary deferred from the previous year, so I started with a half marathon in March and then I did nine further triathlons of varying distance.  My aim was just to get to the finishing line without getting injured, so I took it easy, but I can see on Strava that I clocked up 2640km on my bike between January and October.

Prior to the Ironman, Philip offered me a second injection, but I didn’t need it and I went to Barcelona feeling positive.

The Ironman Triathlon consists of a 2.4-mile sea swim, a 112-mile cycle ride, and then a 26.2-mile marathon run and they all need to be completed within 17 hours.

While on holiday in Majorca I’d been sea swimming every day in and thought I was ready to cope with the waves but, from the moment I got in the water, the currents were surprisingly strong.  Then, as we started the cycle we were faced with really strong headwinds. I was concerned that my pace wasn’t good enough but I was left with plenty of time to complete the marathon which I took nice and steady. And my knee felt strong! It wasn’t even tight the day after. I had no stiffness and no complications – I felt absolutely fine! In fact, I came home and ran a 10K just four days later and it still felt really good.

When exercise and fitness are such an important part of your life, one is inevitably reluctant to have a knee operation. A little part of you is always going to be concerned that something might happen to prevent you from doing what you love. But, for my second operation, I had no doubts about Philip at all. I had complete confidence in him and I would recommend him to anyone. 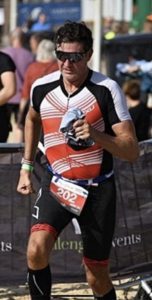