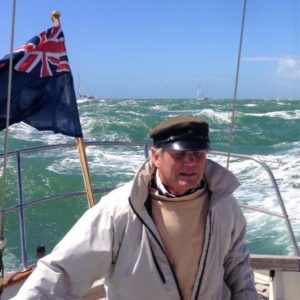 “What surprises me is that people told me that, even after the replacement, I wouldn’t be able to get down on my knees – but I could cross my living room on my knees right now, if I wanted! And I can certainly do all I need to do on the boat again.”

As a keen sailor and the owner of a boatyard, being agile has always been crucial to Isle of Wight-based Chris Waddington. So, when his knees started to become an issue, he was keen to do whatever it took to get himself fit again. Luckily Philip Chapman Sheath was happy to help and to keep encouraging him – even 10 years after the operation.

“If you are a sailor and can’t kneel down on a boat, you are snookered! But that was the position I found myself in back in 2010. The problems started some time before then though. I’ve always led a very active life – I own a boatyard, played squash hectically and was a Master of Beagles in Meon valley before I moved to the Island, so I was always running around a court or over ploughed field and jumping off the side of boats onto concrete – none of which probably did my knees any good! I remember going to see someone about it way back and asking if I should stop working with the hounds, but his advice was, ‘no – keep doing what you enjoy, and we’ll sort out the knees when they are completely gone’.

So, by the time I met Philip, both of my knees were completely gone. The x-rays showed they were bone on bone, and they were incredibly painful. I decided that, if I was going to go through the pain of an operation, I’d like to get it all over and done with as soon as possible, so I had the first knee done on November 18th 2010 and the second one done only 7-10 weeks after that. I wasn’t overly anxious about it though, mainly because Philip is so matter of fact and confident himself, that you can’t help but trust him and feel the same.

I will be eternally grateful to Philip for what he did. I can’t recall exactly what advice he gave me when I left hospital, but he certainly gave me the impression that I wouldn’t be able to do the new knees any damage, so I felt able to throw myself into doing whatever it took to get fit again. Before I even got off the hospital bed, I was lifting my leg up and down to try to get the muscles working and I remember they were happy to discharge me as soon as I showed them I could walk down the stairs.

When I got home, I was lucky enough to be put in touch with an inspirational woman who was ex-army and used to putting chaps back together!  I went to see her once or twice a week and found myself wanting to do my best for her as well and recover quickly. So, I did! I remember her suggesting that I try gently moving the pedals on a static bike back and forth, and suddenly I found myself cycling! I’m not someone who likes public gyms though – mainly because I can’t stand the music they play – so I built my own gym at home, where I can listen to my own music! I have a cross trainer, rowing machine, a few weights and some other bits and bobs, and I do an hour in there every other day.  Recently I even invested in a fitness plate at Southampton boat show. I heard they were designed for Russian astronauts to keep them fit in space and it’s amazing.  It oscillates and works every bit of your body so when I come off it, the muscles in my legs really feel tight! I was a little worried that it might be a bit much for the knees, but I got in touch with Philip again – 10 years after my op – and he was happy to hear from me and to approve of my new toy.

I’m 78 years old with 9.5 grandchildren and two knee replacements, but I feel great. I organise the Yarmouth Carnival every year, I race on a Wednesday evening and the other night I sailed my 38ft, 12-ton boat from Yarmouth to my boatyard in Portsmouth all by myself – with no pain.  What surprises me is that people told me that, even after the replacement, I wouldn’t be able to get down on my knees – but I could cross my living room on my knees right now, if I wanted! And I can certainly do all I need to do on the boat again.

A customer came to the boatyard the other day, and I could see he was struggling to get on and off his boat. I told him to go and get his knees fixed – and then work like hell on getting fit afterwards. After all, it worked for me!