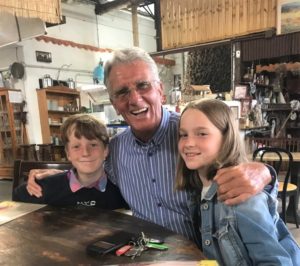 “The bay where we live on the Isle of Wight is stony, so walking along it used to be horrible, but now I cross it like a five-year-old!”

After being to see five or six different surgeons about his increasingly painful knees, keen sportsman Roger Peck was left feeling confused and concerned. None of them seemed to understand how he was feeling or be prepared to help him. Eventually, a friend recommended Phillip Chapman Sheath, and Roger was back on the golf course within six weeks.

‘I’m 75 and like playing tennis, golf and walking and have a couple of farms in the Canary Islands, so I have an active lifestyle.

‘My knees started becoming painful about five years ago and it turned out that I had chronic arthritis in both. It was very debilitating. I soon couldn’t walk down hills and could only crawl up! I had a few ‘clean up’ operations on them, but that didn’t work so I then started considering a knee replacement. I talked to about five or six different surgeons, but it was a confusing and concerning process as, although I knew my knee hurt like hell, I kept being told I should put up with it and wait a bit longer. Eventually, a friend told me about Mr Chapman-Sheath. I went to see him, expecting him to say much the same as the others, but he was brilliant and could see exactly how I was feeling – in fact he said that he was surprised I was still walking! I felt as if my Messiah had arrived!

‘Some consultants are a little self-important, but Mr Chapman-Sheath is not at all like that. He says it as it is – and there’s no fancy silk handkerchief in his top pocket! He is a regular guy – you feel as if you could go and see a football match with him and have a good time.

‘An operation on my worst knee was scheduled for the 27th December, so he gave up some of his Christmas break for me. He came to see me before the operation, and afterwards, and popped in each day I was in hospital.

‘Prior to the operation, he recommended that I have a local anaesthetic and then just enough sedation to put me lightly to sleep, rather than having a general. That was marvellous, as I woke up with no side effects, just feeling like I’d had a good sleep. Perhaps I’m good with pain but, to be frank, I didn’t really have any. There was a bit of bruising, but not much – only what one would expect. The staff got me up and walking on the same day as the operation and I started physiotherapy in the two or three days I was in hospital. When I went home, I continued with the physiotherapy and within a month I was walking without a stick. I was playing golf again within six weeks!

‘Mr Chapman-Sheath told me that I couldn’t do the new knee any harm and advised me to do as much exercise as I could. He was right, the knee is very strong. Of course, it’s not just about the knee, it’s about all the muscles, tendons, nerves etc behind the knee that his clever hands have worked on. You must go home and exercise, but the benefits of that are huge. It makes a big difference to your recovery. I used an exercise bike and did a lot in the swimming pool and now have legs with muscles like I had when I was a rugby player!

‘The operation has given me a whole new lease of life. When you are in pain, you tend to say no to things, but now I have no pain whatsoever in my new knee. The bay where we live on the Isle of Wight is stony, so walking along it used to be horrible, but now I cross it like a five-year-old!

‘In the past, I had to use a golf buggy to get around our fruit farm in the Canary Islands, as it is in the mountains on very uneven land. As a result, I was very restricted as to what I could do there, but last time we were there, I didn’t have to use the buggy at all.

‘I’ve been to see Philip Chapman-Sheath about having the second knee done, but he has advised me to hold off for a while until it starts holding me back. Now that the right knee has been fixed, the left isn’t having to work so hard, so it may be alright for a bit longer.

‘To anyone considering the operation, I would say, go and see someone like Philip who knows his stuff and only works on knees. There is absolutely nothing to be frightened of. Just sort it and, in a few weeks, you won’t have to live with pain anymore. The change in your quality of life is worth any minor discomfort for a month.’