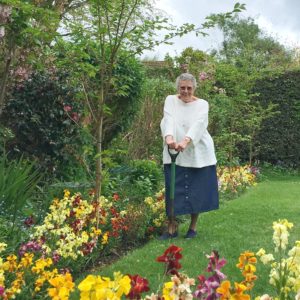 “I now have two dependable legs that I can rely on. That might sound a small thing to some people, but for me it has been life changing. Before, I couldn’t walk upstairs but now I can, no trouble!”

For over two years, Barbara Harper put her ‘creaky’ knees to the back of her mind while she nursed her sick husband. By the time he died in 2016, a knee replacement was a priority but she was, understandably, far from keen to return to the hospital where she had recently spent so much time. Fortunately, a friend recommended Philip Chapman-Sheath…

‘Prior to my husband dying, I had been going into hospital every day to see him so I really couldn’t face going back there for an operation – but it was also clear that my knees had to be fixed. They would lock up completely while I was at the kitchen sink, or even in bed, and trying to free them up again was excruciating. I suppose I was on my feet a lot while I was looking after my husband and was doing all the things in the house that we previously would have shared. I had a stair-lift fitted but it had got to the stage where walking was an issue. I would shuffle along as if someone had bound my thighs together!

‘I’m a positive person and a great believer in just getting on with things, but I was getting desperate. I live alone, don’t have any family – and am a bit of a dinosaur in that I don’t have a computer  – so I need to be able to walk around the shops. Luckily, I had private health care insurance so, when a friend told me that Philip Chapman-Sheath had essentially saved her leg, I asked to be referred to him and to be treated at the private hospital.

‘It was such a success. I liked Philip as soon as I met him. He’s very jolly and has a great sense of humour, but when he took a look at my X-rays, he became quite serious. Eventually he said, “Do you realise that you’ve been walking around without a knee joint?”. Apparently, it had worn away completely! He also told me that my left knee was unstable – and I thought that was my good leg!

‘I had the right knee replaced first, in November 2017, and the left was done a year later. I feel as if I had the worst knees going and now I’ve got the best. Philip promised me that he would give me my life back, and he really has! He is a really lovely man, very approachable, and talked it all through with me in advance. I opted to have an epidural during both operations, rather than a general anaesthetic, so I witnessed first-hand just how knowledgeable he is and how well he works with his team too.

‘A total knee replacement is a major operation and the rate of recovery depends very much on the individual knee. I was in hospital for five days, and you do have to be patient, but you are also encouraged to use your new knee as soon as possible. I had physiotherapy the day after the first operation and, by the fifth day, I could already walk a few steps without crutches.

‘The second replacement was even more straightforward than the first; there was much less bruising and I felt able to get to my feet more quickly. Philip came to see me just two and a half days after the operation and I walked towards him without crutches. Even his jaw dropped!

‘I now have two dependable legs that I can rely on. That might sound a small thing to some people, but for me it has been life changing. Before, I couldn’t walk upstairs, now they’re no problem!’

‘According to the NHS, an acceptable range of bend in the knee is 75 degrees; physios say 110 degrees is normal, but I now have a 140-degree bend in both knees!

‘I’ve just turned 77 and the new knees are designed to last for 15 years, although they can last for over 20. I can also kneel on them and they have minimal scarring.

‘I spent years asking other people to slow down, while I shuffled behind them, so my one goal now is to hear someone say to me, “For heaven’s sake Barbara, slow down!”  I’m not quite there – these things take time – but I will be soon!’