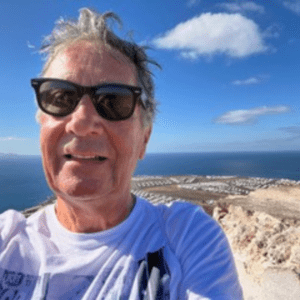 “My wife says that I’m back to the person I was 15 years or so ago – not just physically, but in terms of my attitude too.”

The niggling pain in Andrew Phipp’s knees had increased gradually over years. He’d managed to adjust his life accordingly but eventually realised the significant impact it was having on his enjoyment of life – and not just on him, but his family too! With horribly long NHS waiting lists he took the decision to pay for treatment with Professor Chapman-Sheath and hasn’t looked back. Read his story here:

My knees first started causing problems back in about 1992. I’d done a long road trip through Spain and Portugal and came back with pain in my right knee which was eventually diagnosed as being the result of osteoarthritis. The doctor advised me to put off having a knee operation until I really couldn’t stand the pain any longer – I suppose because I wasn’t yet 70. And, anyway, the wait to have a replacement through the NHS was ridiculously long. So I had a lot of injections to manage the pain but they never worked for long and, slowly, my movement became more limited and the impact on my life became more significant.

You don’t fully notice the extent to which being in continuous pain has affected you until after it has gone. It creeps up on you. The pain gets slowly worse, so you slowly adjust to it and almost get used to it. It becomes the new normal. I found myself, for example, buying an automatic Mazda MX5, when I’d always driven a manual. Then I started limiting the number of times I went up and down stairs, and soon I was almost fearful of having to go upstairs at all. Your personality changes; it takes the edge off you – and it obviously impacted my wife too. We have a place in Spain where we like to spend a lot of time, but just getting through Gatwick airport and onto the plane became a challenge. And, at home, managing our large garden became too much. We even began to think about moving.

Eventually, in July 2021, I told the doctor that I would pay to get it done. I could see that it wouldn’t be long until I was simply sitting around all day, and I knew that would only lead to other health problems.

I was referred to Philip Chapman-Sheath, who I like to call the Professor! He confirmed that both knees needed replacing, and agreed to do the right one first, as I was finding that one the most painful. I asked him how long I would need to wait to get it done. His response was, “I can do it on Wednesday”! That was a bit of a shock!

I didn’t ask him too many questions about what would happen. He was very confident and matter-of-fact, so I trusted him, I also didn’t really want to know the details – so I wasn’t exactly prepared to wake up after the operation and see my knee so swollen and looking like a Ginsters’ pasty!

It did take a few months to recover. It took two months for the swelling to go down and sleeping on my back was a struggle. I found the lack of sleep one of the hardest things, but it was worth it.  Just a few months after the first op, I was laying paving slabs in the garden! I also have very little scarring compared to some people I know. They had staples put in their knee which apparently were really painful to have removed and left long scars like train tracks. I know because we sat in Pizza Express with our trousers pulled up comparing knees!

I had the second knee done the following April. It took a bit longer to recover from, and I still feel it at times, but I remember the Professor telling me that both me and my wife would benefit from the operation, and he is right. When we go to Spain, we can go out for walks together, as we used to do in the past. I can even climb (and descend!) the rocky, uneven terrain up to the crater of a nearby dormant volcano, and without any pain. My wife says that I’m back to the person I was 15 years or so ago – not just physically, but in terms of my attitude too.

The whole family has benefitted really. My grandchildren used to call me ‘Grandad Cripple’, but they don’t anymore. I recently climbed a tree with a chainsaw to cut off the branches that had overgrown an old tree house and was up there all day. And I can play football with them.

I wouldn’t hesitate to recommend the operation to anyone.