In 2012, Professor Chapman-Sheath performed ACL reconstruction surgery on former Aikido GB and World Champion, Marco Crispini. An ACL replacement or reconstruction is a surgical tissue graft replacement of the anterior cruciate ligament, located in the knee, to restore its function after an injury. 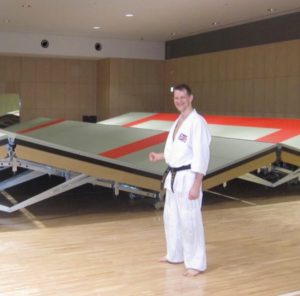 Six years later, it was wonderful to hear that Marco, from Eastleigh, Hampshire is still doing so well and is feeling so enthusiastic about the experience. He says: “I still have 100% full function from my knee. It’s become so normal that generally, you don’t even think about it, but occasionally I reflect how amazing modern medicine is. I bound upstairs in a rush, and suddenly appreciate how wonderful it is – feeling like Eddie Murphy’s character in Trading Places proclaiming “I have legs! I can walk!”

Marco continues to train at a high level in martial arts – Brazilian jiu-jitsu these days, which means he often meet others with ACL replacements; “They always have larger, more visible entry scars compared to mine which is barely visible” he says, “I would have no hesitation in strongly recommending Professor Chapman-Sheath and choosing him for myself if I ever needed to again.”